A very interesting mule featuring an obverse of Titus as Augustus and a reverse intended for the deified Vespasian. Until this specimen surfaced only one other was known, it belonging to Curtis Clay, which is an obverse and reverse die match to my example. If I may be so bold, the following is what Curtis Clay wrote about his own specimen in 2005 which I cannot improve upon.

"This denarius is without doubt a mint mule, combining an obverse of Titus as Augustus with a reverse meant for Divus Vespasian. A normal denarius of Divus Vespasian with rev. STRUCK FROM THIS SAME DIE was in Rauch 67, part I, 26 Feb. 2001, 368 (I tried to acquire it too but was outbid!).
Does any list member possess a normal aureus or denarius of Titus struck from this same head-left obv. die, and if so, what is the reverse? It is a matter of some historical significance whether this obverse die belongs to 23 June-31 Dec. AD 79, the first six months of Titus' reign, COS VII on rev., or the next six months, AD 80 up to July 1, COS VIII on rev. (After that, perhaps because the mint burned down in the fire of 80, no more aurei or denarii were produced at Rome until the accession of Domitian in Sept. 81.)
Being able to date this obv. die would more or less solve a vexing question, namely when was Vespasian consecrated?
T.V. Buttrey, following H. Mattingly, believes that the consecration must have been postponed until 80, since all coins of Domitian as COS VI (79), plus a few as COS VII (80), call him simply AVG F, Son of the Augustus. Only when new aureus and denarius rev. types were introduced for Domitian early in 80 was his filiation changed to DIVI F, Son of the Consecrated Emperor.
I however think Vespasian was probably consecrated immediately after he died on 23 June 79. The persistence of AVG F for Domitian into 80 is odd and I cannot explain it, but I think this fact is outweighed by two other considerations.
First, it was natural, indeed inevitable, that the status of a deceased emperor, deification or condemnation, should be decided by the Senate immediately after his death. Immediate consecration or condemnation is explicitly attested for a number of other emperors before and after Vespasian. Delay could occur when the successor wanted consecration to enhance his own prestige but the Senate thirsted for revenge by condemnation, as in the cases of Tiberius and Hadrian, but there was no such disagreement about Vespasian: both Titus and the Senate surely favored his consecration. So it is impossible to explain why his consecration should have been postponed for six or more months after his death.
Second, the mint was striking aurei and denarii for Vespasian in four rev. types during the final six months of his life, Jan.-June 79.
When Vespasian died, three of these types were taken over by Titus as Augustus and, judging from the numbers in the Reka Devnia hoard, were struck in about the same volume until the end of 79 as the three types of Titus as Caesar in 79 which he also continued as Augustus. The aureus and denarius type of Domitian as Caesar in 79 also did not change when Vespasian died. In other words seven of the eight common aureus and denarius types of 79, three of Vespasian which were carried on by Titus, three of Titus himself first Caesar then Augustus, and one of Domitian Caesar, were without doubt struck continuously from beginning to end of the year.
But what about the fourth common precious-metal type of Vespasian alive in 79, Victory placing shield on Trophy? This type was not struck for Titus as Augustus, instead we find it with obverse of DIVVS AVGVSTVS VESPASIANVS, and with the titles of Vesp. on reverse changed to EX SC to convert it into a consecration type! This type was about as common in the Reka Devnia hoard as the six denarius types of Titus as Augustus in the second half of 79.
I find it impossible to believe that this type was revived for Divus Vespasian after his alleged delayed consecration early in 80. It sticks out like a sore thumb among the other precious metal types of Divus Vespasian, as the only one to merely repeat a type of the living Vespasian instead of advertising the new honors that had been decreed with his consecration. No: obviously the type belongs to the second half of 79, contemporaneous with the other three types of the living Vespasian which Titus had taken over for himself, proving that Vespasian was consecrated immediately after he died!
This is the same rev. type of Divus Vespasian that was wrongly coupled with an obv. die of Titus as Augustus on the denarius reproduced here. If my chronology is correct, this will have been an obv. die of AD 79 and will also have been coupled with correct reverses of Titus dated COS VII not COS VIII, if such coins have survived and can be found!
I have searched without success for this obv. die in coinarchives, wildwinds, several photofiles compiled from printed sale catalogues and lists, and the major published museum catalogues."

Interestingly enough, earlier this year an obverse die match was found with an appropriate Titus reverse (Tripod and dolphin) dating to 80 AD.

While collecting Flavian coins I sometimes make nice little discoveries. This Titus as Caesar denarius with the Salus reverse type coupled with the obverse legend on the present coin is unlisted in all the major references, including the new RIC II. The coin comes from a series minted in 73 AD in which the Salus type was known for Vespasian but not for Titus until this present denarius surfaced. Ian Carradice has given this new type the number 529A (under Vespasian) in the RIC II Addenda. Also, this coin is an obverse die match for the RIC V531 plate coin.

What to my eyes makes this a highly desirable coin is not the rarity but the bold portrait which was described by the Flavian collector who sold it to me as "striking". I tend to agree. The reverse is weakly struck (worn die?) but well centered.

Struck on a huge flan and weighing 3.48 g. This coin is a true beauty in hand.

Early in 88 a remarkable series of rare issues were struck. The mark of these issues were the full spelling of GERMANICVS (also GERMANIC) on the obverse, and the reverse featuring short legends written across the field. The flans are normally large and the style quite fine. Perhaps this exceptional series is commemorative in nature: the year was full of military activity and of course the Saecular Games were held. Unusually, the TR P and IMP numbers are missing from the issue.

This denarius has all the hallmarks of this quality issue. A real beauty in hand. Same dies as the BM specimen (RIC II plate coin).

During 88-89 Domitian's imperial salutations were coming fast and furious due to wars being fought against both the Chatti and the Dacians. As a result, the honours piled up rather quickly. The different issues during the time period are divided up by imperial acclamations. Some issues are rather small, depending how long it was before word reached the mint of a new salutation. It was previously thought when Domitian became TR P VIII in mid September he was at IMP XVI, however, with this new denarius we now know he was still IMP XV. This realisation bumps the number of issues for 88-89 from 6 to 7, this coin being part of the new first issue now dated TR P VIII IMP XV. The issue had to be quite minuscule (T.V. Buttrey joked perhaps struck for only 30 minutes until news of IMP XVI arrived), only this one Minerva type has surfaced, doubtless the other three standard Minerva types were struck alongside but have yet to be recorded. Forvm Discussion Board member tacrolimus reported an example of the type in 2009, a die pair match with my coin. T.V. Buttrey has assigned this coin 651A in the upcoming RIC II.2 addenda. 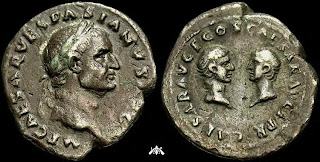 A silver denarius minted in Rome in 70 AD, this was a coin that announced to the world Vespasian's intention of founding a dynasty. The reverse has the confronting bare heads of Titus and Domitian, both were Caesars (princes) at the time of the coins production. Vitellius also issued a similar type the year before with his own children on the reverse. After the chaos of the recent civil war, Vespasian was bringing stability and peace to an empire that badly needed it. His coinage was rich in propagnada, this coin is a good example of such.

This coin has only been in my collection for a few years now and my love for it has not waned.